Those of us who hung out in the “The Sixties Culture” experienced an ecstatic decade which has affected our lives ever since. The Museum is a project that can remind us how our culture can be creative, conscious and compassionate. I support it.
—Ram Dass

We sought truth, demanded justice, and found freedom in self-expression. We rejected the restrictions of a puritanical lifestyle. We sought out and embraced new philosophies. It was a moment in history when a mushroom explosion of consciousness began altering the life force. Through that explosion, we broke down the prison walls of “intellect as the ultimate”. We focused on the heart, and by doing so, reopened our cookie jar of possibilities… politically, socially, sexually and spiritually. The effects of that explosion have permeated every aspect of our culture today.

We, as a generation, have a responsibility to see that the ‘60s are remembered in the context in which they unfolded. Thus we plan on building the Sixties Museum which will chronicle the events of the era, so others will finally be able to see, hear, touch and experience their parents’ and grandparents’ idealism. How much fun is that?!

The Museum of the Sixties
​‘If we build it, they will come, but will they ever go home?’ The Sixties was a decade of “Liberation” and “Revolution”, a time of personal journeys and fiery protests. It transcended all national borders and changed the world. People, young and old, united in opposition to the existing dictates of society. We were living in fear: fear of the bomb, fear of sex, fear of communism, and fear of our own governments. We wanted to break free. The ‘60s were the result of that breakthrough.

The Sixties embodied a spirit of self-awareness and introspection. We sought truth, demanded justice, and found freedom in self-expression. We rejected the restrictions of a puritanical lifestyle. We sought out and embraced new philosophies. It was a moment in history when a mushroom explosion of consciousness began altering the life force. Through that explosion, we broke down the prison walls of “intellect as the ultimate”. We focused on the heart, and by doing so, reopened our cookie jar of possibilities politically, socially, sexually and spiritually.

We as a generation have a responsibility to see that the ‘60s are remembered in the context in which they unfolded.

Lisa Law’s collections of photos and memorabilia is being shared with those who remember those times and those that want to know what really went on then and until now and how it has affected our lives in so many ways. She shows the relationship between the Native Americans and the Spanish elders living in the mountains and how they shared knowledge with each other that enriched their lives.

Location
Santa Fe, New Mexico is the perfect place for our dream to be realized. Here, in the Land of Enchantment, close to Mother Nature, is where many people of the ‘60s came to change their lives.


Concept
Lisa Law has documented the Sixties since 1965 and has collected memorabilia and artifacts and bodies of work by other artists and photographers and wants to create a place where people can come and experience these items that represent the values and movements created during the Sixties. Children and grandchildren of Baby Boomers will be able to see, hear, touch and experience their parents and grandparents idealism. Classes about this era are being taught everywhere and some schools are using Lisa’s book’ Interviews with Icons’ as a text book.The museum will act as a resource center for teachers and students, enabling them to study in an environment that embodies the 1960s vision and consciousness. It will demonstrate how the seeds of the Sixties were sewn, nurtured, and are now blooming as we enter the next millennium. Museums have important functions. The Museum at Bethel Woods is an immersive and captivation multi-media experience that combines film and interactive displays, text panels and artifacts to tell the story of the Sixties and Woodstock. It explores the unique experience of the Woodstock festival, its significance as a culminating event of a decade of radical cultural transformation, and the legacy of the Sixties and Woodstock today. The Experience Music Project (EMP) in Seattle, Washington is a leading-edge, nonprofit museum, dedicated to the ideas and risktaking that fueled contemporary popular culture. The Rock and Roll Museum in Cleveland allows visitors to experience and understand artistic and cultural phenomena. The Museum of the Sixties will embody the energy that exploded out of our psyches and into the cosmos and effect it has had on the decades to follow in positive ways.

The exhibits will chronicle:
Politics: The Civil Rights movement, political assassinations, the Vietnam War and the antiwar movement, the Diggers, and Women’s Liberation and Human rights. Culture: Haigh-Ashbury, music, fashion, textiles, photography, publications, poster art, comics, beat poetry, theater, films, underground newspapers, bikers, Love-ins and Be-ins, the Monterey Pop and Woodstock festivals. There will be a display of The history of New Mexico from the days of the communes to the present which covers social, political,theatrical, and musical documentation.

​Self-discovery:
Native American values and influence on the hip generation, Psychedelia, the hippie movement, the natural food movement, the beginnings of “alternative” medicine and rediscovery of traditional healing, natural childbirth, the sexual revolution, spiritual awakening, and Back to the Land/communal living. There will be a tipi and a vegetable garden, fruit trees, ponds,fountains and areas for contemplation. Examples of permaculture will be evident in all areas. Our wish is that the buildings will be powered by solar energy (backed up with generators). All washing ingredients will be biodegradable or compatible and all facilities will recycle. Hemp products will be used as often as possible. One room of the building will show movies of the era. There will also be a library with couches and a fireplace where people can look at and read Lisa Law’s collection of books that have been published with her use of her photographs.

The Museum:
When people visit The Museum of the Sixties they will experience a happening, a virtual celebration and the spontaneous joy of a time of self-discovery. At the hub of the museum, the hippie bus SILVER will sit in all her glory in her final resting-place. SILVER traveled across the country with Wavy Gravy and the Hog Farm. In 1968, owners Tom and Lisa Law rebuilt SILVER which is a 1947 Chevy flatbed. The bus has been fully restored since then and still runs. The exhibition surrounding the bus will depict Silver’s travels and the events she participated in as she traveled cross-country. All of these travels have been documented and will be shown in the installation. There are many aspects of the Sixties and each deserves its own exhibition space. The exhibits will be in chronological order showing the emergence of each movement based on what transpired before it. We plan to have a snack bar for those who want to stay at length soaking in all the imagery they are surrounded with as well as a gift shop where they will be able to purchase copies of books and photos and other memorabilia. There will also be computers available for research. Santa Fe is now a destination point for many elders from around the country and our guess is that the museum will be a place where they can gather and socialize and meet people of like mind.
We feel that tourists will find the museum extremely engaging. We are now in the process of looking for a building with about 20,000 Sq. Ft. with many rooms to be able to house each subject that is being displayed. Lisa plans on living on the property in a separate house so she can be available to the museum as needed.
We have a non profit status for contributions.

Board Member Lisa Law:
Lisa Law has spent over four decades capturing the shifting tides of American culture on film. Her reputation is built on photographs, unique for their startling sense of intimacy and spontaneity. Her work has been published in more than 85 books and documentaries and countless magazines from Newsweek and people to Vogue and Hemp Times. Her award-winning documentary, ‘Flashing on the Sixties: a Tribal Document’, has been seen on Cinemax, The Discovery Channel and PBS, and is available on home video. Dennis Hopper described it as, “The most compelling, moving documentary on the Sixties”. Lumen Press ofSanta Fe has published a collection of interviews from her documentary; a book entitled ‘Interviews with Icons’. The Smithsonian Museum of American History exhibited a show of her work in 1999 and now holds a 208-piece collection in its archives. The Bethel Woods Museum of Woodstock presented a show of 58 pieces of Lisa’s photographs taken at Woodstock in the show ‘Celebrating Woodstock’ during the fall of 2012. She has her photographs in six different galleries in the US and people from all over the word collect her work. Lisa lives in Santa Fe, New Mexico where she runs her photo and archive business, Lisa Law Productions, providing images for many publishing companies and film productions and museums. In her spare time continues to photograph life around her, she works on many philanthropic activities, tends to her vegetable garden, fruit trees and cares for her 5 grandchildren. She is ready to realize our hopes and our dreams and direct the creation of the Museum of the Sixties.

Budget:
If we were to raise $3 million dollars we could buy and remodel a building or build a new building that would house the entire collection for the Museum of the Sixties including storage space and offices.

letters of support for the museum of the sixties 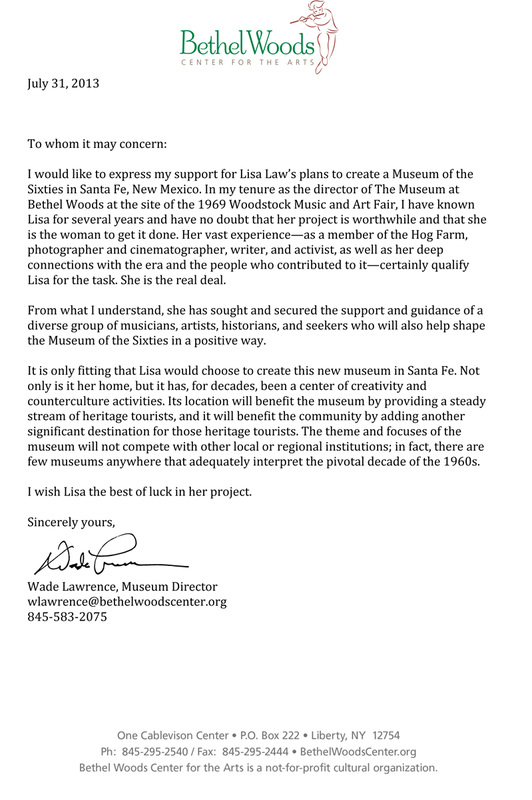 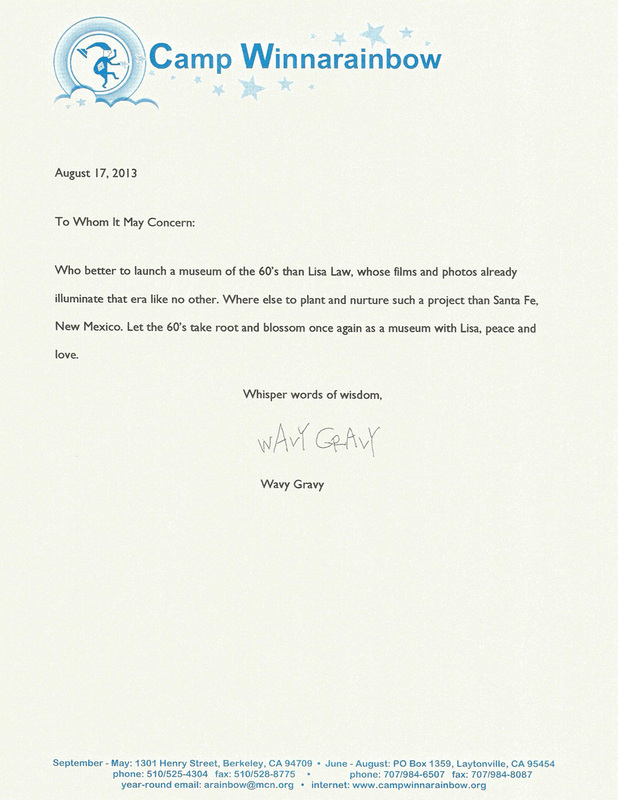 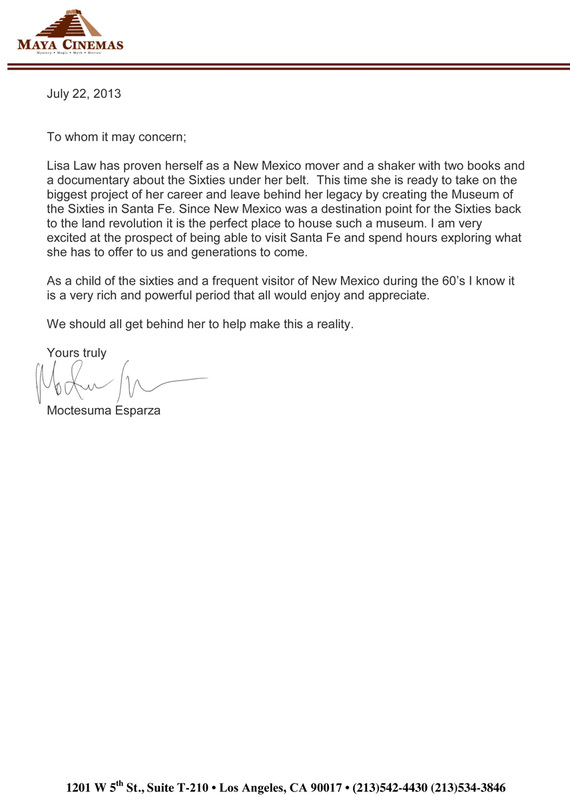 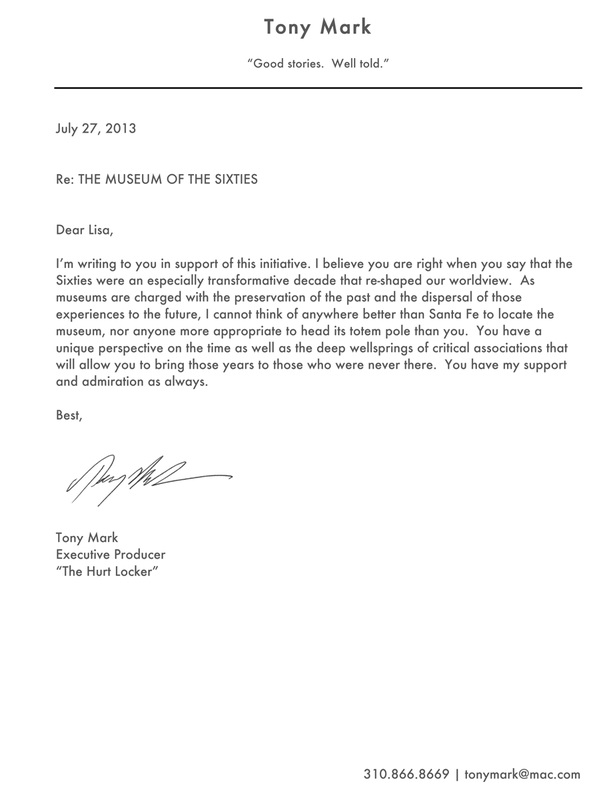